It is extremely important to have a qualified home inspector. If your home inspector misses an abandoned buried oil tank you could possible have a very expensive clean up, if it is leaking. It happens every day to someone.

If you suspect an abandoned underground oil storage tank or would like make sure that there is no hidden buried tank, we can help. We have equipment that is able to detect ferrous metal oil tanks that may be hidden beneath driveway, patios, the lawn, sidewalks and flower beds. 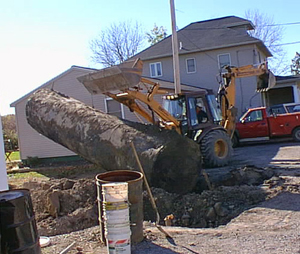 Removal of an abandoned oil tank 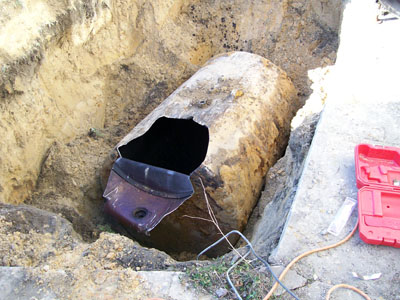 LEAKING OIL TANKS
Leaking underground storage tanks are a serious threat to ground water supplies, especially if these tanks are located in sensitive ground water areas. Sensitive ground water areas are those areas near public or private water supply wells and areas of aquifer recharge.
Problems resulting from leaking tanks can include: surface water contamination, surface and subsurface soil contamination and property damage. Property damage can include seepage into buildings and damaged buried telephone conduits. Banks, mortgage companies and real estate brokers sometimes require a site assessment of properties which contain unregulated underground storage tanks to avoid these problems and their associated liability.
Vapor leakage from tanks depends upon soil and weather conditions from underground tanks. Leakage can cause health problems ranging from nausea to respiratory distress. Another problem is possible combustion and fire, which is a concern for tanks next to buildings since vapors may leak into the building.
Other less frequent problems associated with underground storage tanks include spills from overfilling the tank. Heating oil spilled during overfilling may contaminate the surrounding soils. This problem, if caught quickly, may involve only minor cleanup.
Leaks from underground storage tanks result from defects in tank material, improper fittings, improper installation, damage during installation, corrosion or mechanical failure of the pipes and fittings or tanks which are improperly abandoned or removed. Older tanks, especially those constructed of bare steel and those tanks located in highly corrosive areas, are more susceptible to leakage problems.

PROPER CONSTRUCTION AND INSTALLATION OF OIL TANKS
New installations of homeowner underground storage tanks should be properly designed, constructed and protected from corrosion. All tanks, regulated or unregulated, must comply with local building, fire and zoning ordinances. Proper construction reduces owner liability and the threat to ground and surface waters.
Materials used for underground tanks should be corrosion proof, such as fiberglass reinforced plastic or steel wrapped with polyethylene, especially in sensitive ground water areas. Also, steel tanks can be purchased with corrosion protection for the tank and piping. Double-walled tanks and piping can provide added protection at a higher cost.
Protective equipment, including spill and overfill prevention devices and daily or continuous discharge monitoring systems, is also recommended. Older tanks, especially those over 20 years in age, should be replaced if they are not corrosion protected or at least tested for leakage.
The placement of tanks in close proximity to the ground water table or within the water table should be discouraged. Tank owners can opt for conversion to an alternate heating source for an above ground tank with some form of additional containment that will capture leaks or overfills. These options should be strongly considered in sensitive ground water areas. Local construction code officials and fire officials should be contacted for restrictions on these alternatives to underground tanks.
Improper handling during installation can result in damage that creates leakage. Tanks should be installed according to manufacturer’s installation instructions.

OIL TANK LEAK DETECTION
Some signs of a leaking tank are obvious without any form of monitoring. These signs include: unusual amounts of water in the tank, unusual odors in water supplies, petroleum products in basements, malfunctioning heating systems, dead or dying vegetation near the tank and an unusual increase in fuel usage.
It is recommended that homeowners have tank tightness tests performed when the tank is installed. It is strongly recommended that tightness tests be performed on unregulated tanks periodically, especially those in sensitive areas and for older tanks. Early leak detection is a tank owner’s best protection against costly cleanup.

REPORTING AN OIL SPILL
On the average, one residential spill is reported to the NJDEP per day. Aside from the protection of the environment and public health, as well as protection of the tank owner from serious liability suits, tank owners are required to report and clean up the discharge of hazardous substances regardless of the quantity released.
Leaks, spills or other types of contamination should be immediately reported to the local fire department, health department and the New Jersey Environmental Action HOTLINE 1-800-WARN DEP (1-800-927-6337). The Environmental Action HOTLINE is a 24 hour a day seven day a week dispatch, which receives reports of both emergency and non-emergency environmental incidents.

If a discharge is continuous, it should be stopped immediately. This may prevent extensive environmental damage and a subsequent large and expensive cleanup. The tank should be pumped out by the supplier and the piping isolated from the tank. Contaminated soils should be removed as soon as possible after consultation with the NJDEP for proper disposal procedures.

Homeowners should contact their insurance company as soon as possible after the incident to determine their coverage. Ordinarily, liability insurance will cover damage to other properties. The quicker remedial action is taken, generally the less damage is created and the less the cleanup cost. Cleanup of spills resulting from leaking tanks and provisions for alternative water supplies, if needed, are costly and the tank owner is ultimately responsible for these costs.

Local governments should take action to ensure the proper abandonment or removal of non-operational tanks. Local construction code officials should be contacted prior to closure of a tank for information on local ordinances and permits. Proper abandonment of the tank includes draining the tank and piping of product, cleaning to remove residues and degassing. Residues and sludges should be disposed of properly. If left in place, the abandoned tank should be filled with an inert substance, such as sand, foam or a cement slurry.

ALTERNATIVES TO UNDERGROUND OIL STORAGE TANKS
There are alternatives to underground tank storage. Homeowners are encouraged to select environmentally safe options for storage. These options include:
1) An aboveground tank (if allowed by local construction codes) with some type of containment to prevent discharges due to leakage or spills;
2) A basement or garage tank with proper containment (if allowed by local construction codes);
3) Conversion to another type of heat.
Installation of an underground storage tank should be proposed as a last alternative.

We Inspect Houses as if it were for Our Own FAMILY! Throughout New Jersey! Call!201.460.0027 Guaranteed!